PlayUp is one of the newest betting sites around. They launched a result of TopBetta, Classic Bet and MadBookie merger. They offer a full range of Australian sports and races, as well as most international events. On top of that, you can also play various daily fantasy sports leagues at PlayUp.

PlayUp is one of the newest additions to the Australian betting market. Because of the fantastic betting offer and a great mobile app, this operator became an instant success.

PlayUp was formed after TopBetta, ClassicBet and MadBookie merged, combining the best of all three. They have a huge range of sports and betting markets, plus some of the highest odds you’ll ever find.

If you are wondering how to start betting at PlayUp on a smartphone or tablet? If you want to learn about it, check out our PlayUp app review, where we reveal everything you should know before betting.

At first sight, PlayUp app doesn’t look overwhelming at all. In fact, some players may say it looks basic, especially when compared with other top sports betting apps. But when you start using it, you learn to appreciate its simplicity. There are no shiny banners or too many special offers on the homepage that are making “noise” and distracting you from what you actually want to see.

With the PlayUp app, everything is done as simply as possible. There is one tab for racing and another for sports. You can further look inside each of them to see what the upcoming events are or browse all available options. 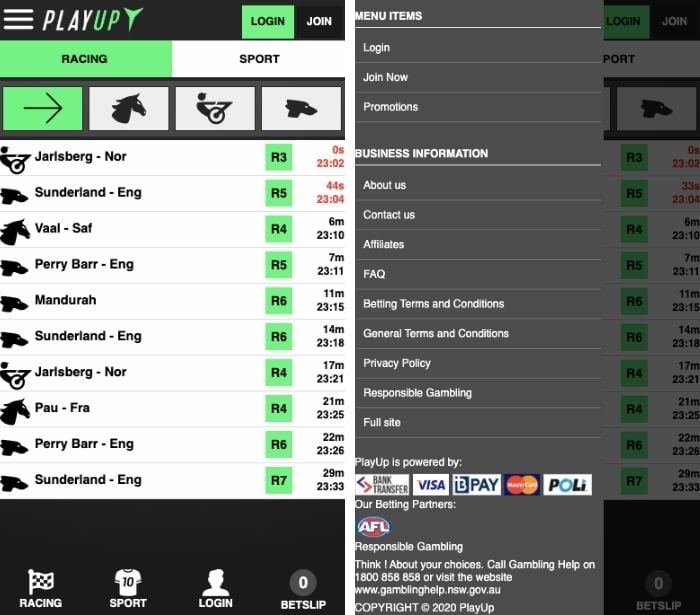 You’ll see that they offer a fantastic range of sports and races, including all of the most popular matches. Here you can bet on 30+ sports, including soccer and NBA to AFL and Cricket among others. The only thing missing is live streaming, but if you want to find out what other sites are offering this service, check out our page where we list live streaming betting sites.

If you need anything else, just click the menu button in the upper left corner. But once you’re in, you’ll notice that there isn’t much going on. You’ll only find things like customer support info and T&Cs in the main menu, which really makes it easy to follow.

The people at PlayUp wanted to create minimalistic betting apps that will give players a way to place their bets as simple as possible. This applies to the web-based app, which is extremely basic. The iOS and Android apps have a bit more flair, but there is no doubt that PlayUp designers are fans of minimalism.

If you have already tried some of the other Android betting apps, then you probably already know that gambling applications aren’t allowed on the Google Play Store. That’s why you’ll have to visit the PlayUp site and directly download their app for Android devices. Don’t worry, this is a quite effortless task!

Go to the ‘Android App’ page and follow the instructions. When the download is over, install the app and log in with your credentials. As you can see, there isn’t much room for error here. Nevertheless, we have come up with a short step by step guide, just to be sure there that everything is clear.

In case you are an iPhone or iPad user, all you need to do to start betting with the PlayUp is to visit the App Store and download their native app. Before doing so, make sure you have at least 75 MB of free space, and that your device is running iOS 9.0 later.

The whole process is almost fully automatic. To get the app, just type PlayUp in the search bar on the App Store and click the download button. This is a quite straightforward process, and to make it even easier, we have come up with a step-by-step guide on how to download the PlayUp iOS App. 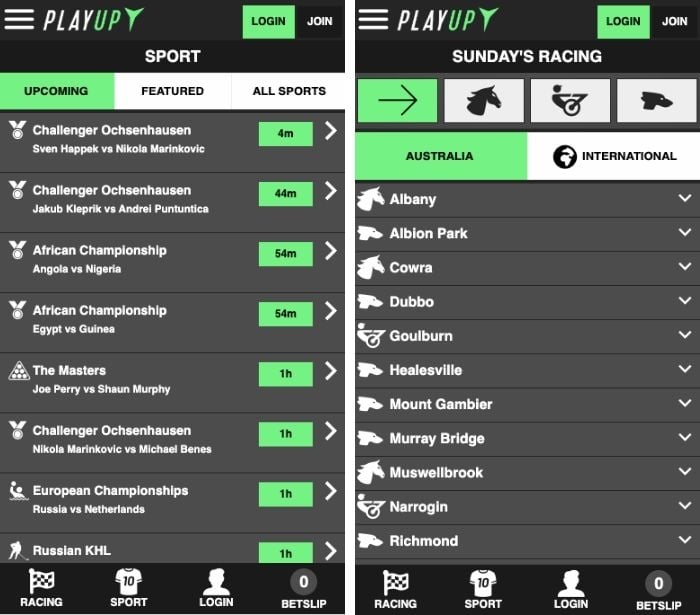 PlayUp offers a solid range of payment options. It’s nothing special, but it should be enough to satisfy the needs of most players. Here you can deposit via Bank Transfer, Visa, BPAY, MasterCard and POLi. All of these are available on both desktop and mobile, meaning that you can seamlessly switch between devices, without having to worry about your payments.

Depositing over a PlayUp app is very straightforward. If you have already staked some cash over the desktop app, you should be able to do the same over the mobile without too much effort. For all first-time depositors, we have made a quick guide on how to deposit with PlayUp app.

How to Deposit With PlayUp App?

PlayUp offers phone, live chat and email assistance, but note that agents aren’t available 24/7. If you come across a problem while betting at PlayUp, their customer support will be there to help you every day from 7 am to 12 am. We would like to see them providing an around the clock support, but since they are already available for most of the day and evening, the absence of full-time care shouldn’t be that big of a deal.

Another thing that’s missing is the live chat button for quick contact. It’s there, it’s not easily available. Adding a button like this will significantly improve the user experience. But before contacting them directly, make sure you have taken a look at the FAQs page, as there is a lot of useful stuff that can help you solve simpler, less important issues. 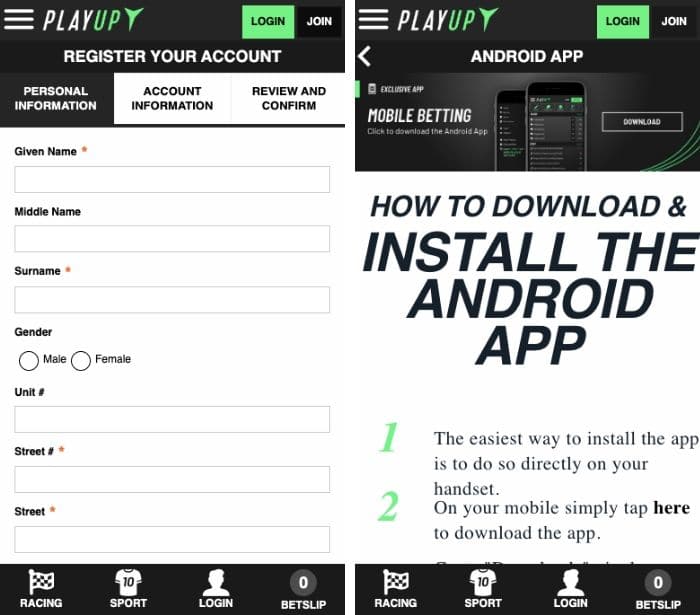 PlayUp is offering a simple but very handy mobile betting app. It isn’t super packed with lots of options, but it will let you place bets on your favourite sports events with as little effort as possible. You can easily download native apps for iOS and Android or just use the web-based app, in case you aren’t a fan of downloadable software.

As you could see from this PlayUp app review, they have tried to make a straightforward mobile platform, so if you’re searching for a modern-looking app with tons of features, this isn’t the place for you. In any other case, we recommend you to give PlayUp a chance and try betting with their mobile app!

PlayUp has one o the most user-friendly betting apps we have ever tested. Click the button below to learn more about this awesome app. PlayUp app overview

Since betting apps aren’t allowed on the Google Play Store, you’ll have to download the Android app directly from PlayUp site. Just visit the ‘Android App’ page and follow the instructions. If you’re not sure how to do it, check out our step-by-step guide on how to download this betting app. It’s very straightforward!

No, they don’t offer 24/7 customer support. Agents are available every day from 7 am to 12 am. You can get in touch with them via phone, live chat or email. To learn more about PlayUp customer support, check out the article above.

Can I make a deposit via PlayUp app?

Yes, you can. PlayUp has all the same payment methods available on all devices. It means that you can both deposit and withdrawal using your favourite banking option even when betting on mobile. To learn more about how to place a deposit via the PlayUp app, take a look at the article above.

Is there live streaming available on the PlayUp app?

No, at the time of writing this review, PlayUp wasn’t offering a live streaming option. We hope that they will introduce that feature anytime soon, but until then you can use live stats to keep track of what is happening on the field.