Horse racing is a hugely popular sport in Australia and the race that every jockey, trainer and owner wants to win is The Melbourne Cup. Known as the race that stops a nation, this 3200m (2 mile) flat handicap is one of the most valuable turf races on the planet. It is run annually at the Spring Carnival at Flemington Racecourse in Melbourne on the first Tuesday in November.

Our guide to betting on the Melbourne Cup will outline some useful tips and tricks for finding the winner of this race. We will also look back at the history of the race and reminisce over some of the shock results. So, if you are contemplating having a wager on The Melbourne Cup then you are in the right place.

Where To Bet On The Melbourne Cup

Since the Melbourne Cup is as popular as it is, there are more than enough solid bookmakers too offer the odds and specials for it. There are tons of great options available, so take your time and choose wisely. To make the selection process even easier, we have listed our top 5 bookmakers below. Just click any of the links and you'll be forwarded to the bookie's site. From then on everything is straightforward, look around and if you like it, place a bet!

History Of The Melbourne Cup

This race has been around for well over a century having been first run all the way back in 1861. The prize for the winner was the modest sum of £710 and a gold watch. A Sydney based horse called Archer won the first renewal for jockey John Cutts and trainer Etienne de Mestre. Amazingly, Archer reappeared the following day and won another prestigious prize, the 2 mile Melbourne Plate. He won it again in 1862 but he was denied the chance to complete the hat trick due to a clerical error.

Another famous early winner of the race was wonder filly Briseis who scored in 1876. This 3yo won the VRC Derby, The Melbourne Cup and the VRC Oaks in the space of six days, a record that will never be broken. She was ridden by 12 year old jockey Peter St Albans and she was trained by James Wilson Snr. Another legendary winner was the 1930 victor Phar Lap and he was a real punter’s favourite. He was the shortest priced winner of the race at 8/11 and he was the subject of an assassination attempt before the race, no doubt a bookie worried about losing bundles of cash!

In more recent years The Melbourne Cup has developed into a truly international event, attracting horses from the four corners of the globe. Irish master trainer Dermot Weld was the first foreign trainer to win the race in 1993 with Vintage Crop and he repeated the trick in 2002 with Media Puzzle. Another landmark was reached in 2001 when Sheila Laxon became the first woman to train the winner of the race, while the first female jockey to win it was Michelle Payne on 100/1 shot Prince Of Penzance in 2015. 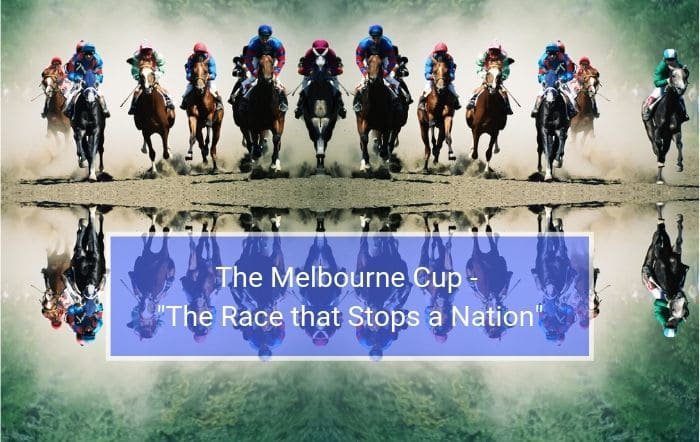 The Melbourne Cup Information and Facts

How to Bet on The Melbourne Cup

With a huge field it is a fairly difficult task trying to find the winner of The Melbourne Cup. It hasn’t been a happy hunting ground for favourites down through the years and it makes sense to bet small stakes at big odds in a race of this nature. Before you place any wagers on The Melbourne Cup it makes sense to check out the prices available from a selection of bookmakers as odds can vary massively.

If you fancy having a futures bet on The Melbourne Cup the likes of Ladbrokes Australia, BetEasy and ClassicBet have markets available sooner than most others. However, it is important to remember that any futures wagers that are placed are ‘All In’ so if your selection doesn’t run you lose your money.

You can bet on all the usual horse racing markets depending on your favourite bookie for The Melbourne Cup. Win, place and each way bets are the most popular bet types for the race that stops a nation. However, if you want to win big perhaps an exotic like an exacta, trifecta or quaddie might be more to your liking. Some bookies offer extra match betting markets too, so no matter what sort of wager you prefer, you should be able to find a market that suits.

It is not often that a 100/1 shot wins any race, let alone one as big as The Melbourne Cup, which has a prize fund of over $6 million dollars. There were three 100/1 winners between 1861 and 1940, but the most recent one will still be fresh in the memory of many punters. When Prince Of Penzance lined up in 2015 with Michelle Payne on his back, nobody gave the 6yo son of Pentire a chance of winning Australia’s most famous race.

He had finished a good 2nd in the Moonee Valley Gold Cup over 12f on his previous start, but on all known form it was impossible to fancy him upped in trip to 2 miles. However, he proved everybody wrong and scored by half a length from talented Irish raider Max Dynamite under an inspired ride from Michelle Payne, who became the first-ever female jockey to win the race. It just goes to show that anything can happen in horse racing, even in a race as valuable as The Melbourne Cup.

Most of the Australian betting sites have released odds for the Melbourne Cup by now. We know how tiring it can be to switch between the sites and compare the prices, so we have listed them all in a single table. This way, you'll be able to quickly check out the odds, and find the best value. Keep in mind that some of the odds may change in the next few days. Therefore always double-check on the bookmaker's site before placing your bets.

With a usual field of 24 horses, finding the winner of The Melbourne Cup is not an easy task. However, there are a number of trends that can help point you in the right direction and our experts here at AussieBet have discovered some startling stats that could help you pinpoint the most likely winner.

“Top-shelf” Australian bookmakers offer live streaming to their customers. However, you have to first join one and make a deposit to get access to the live streaming section. In general, the top 5 are usually a safe call, especially when it comes to an event the size and importance like the Melbourne Cup. The bookmakers listed below are without a doubt, the ones you should consider first, before joining any other bookie. They have the odds, the live streams and they take good care of existing customers!

When is the Melbourne Cup taking place?

The Melbourne Cup is a famous Australian horse race that is held annually. Traditionally it takes place on the first Tuesday in November which is an annual public holiday in the state of Victoria. In 2019 it is set to be held on the 4th of November.

Where is the Melbourne Cup happening?

Since it is conducted by the Victoria Racing Club and held on a public holiday in the state of Victoria, the Melbourne Cup is always held on the Flemington Racecourse in Melbourne, Victoria.

What time does the Melbourne Cup start?

The Melbourne Cup 2019 will start on the 5th November with the first race taking place at 10:40am. The race day will be over once we have the results of the last race, which is scheduled for 5:20pm.

Dave
Dave is the horse racing go-to guy! He approaches betting from a different angle, one that's worked both for him and all Aussiebet followers. Besides racing, he's keen on cricket, rugby and golf! Dave is a core team member of Aussiebet!