PlayON offers one of the most comprehensive selections of daily fantasy sports on the market. Their website is very user-friendly, but when it comes to features, PlayON lags behind the competition. They don’t have native apps and their customer support can be better. I definitely recommend looking elsewhere.

PlayON is one of the latest DFS sites to join the Australian betting market. They offer a range of sports and a very user-friendly website. This operator focuses only on daily fantasy contest, so no need for season-long commitments!

I joined this operator as soon as they started accepting Aussie players. From what I could see, PlayON has a lot of things to improve. There are no native apps or many payment options, so I believe that you’ll be better off with some other top fantasy operator like Draftstars. 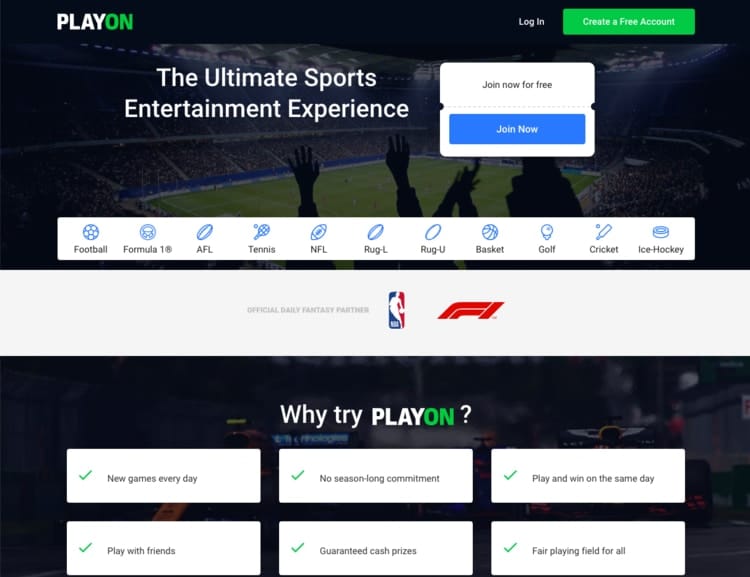 Unlike most of the other DFS sites around here, PlayON isn’t an Australian company. They were originally founded in the UK in 2012. Today PlayON has customers from over 100 countries around the world, including Australia. Since they are a global brand, you’ll get access to a broad selection of international sports leagues and tournaments.

On the other hand, their range of domestic sports isn’t that great. It’s not as great as at some of the Aussie DFS brands, like Draftstars.

Keep in mind that PlayON only features daily fantasy sports, meaning that they don’t offer leagues that require any long term commitment. I usually just pick the tournament, draft players and wrap everything up on the same day.

How to Play Daily Fantasy Sports with PlayON? 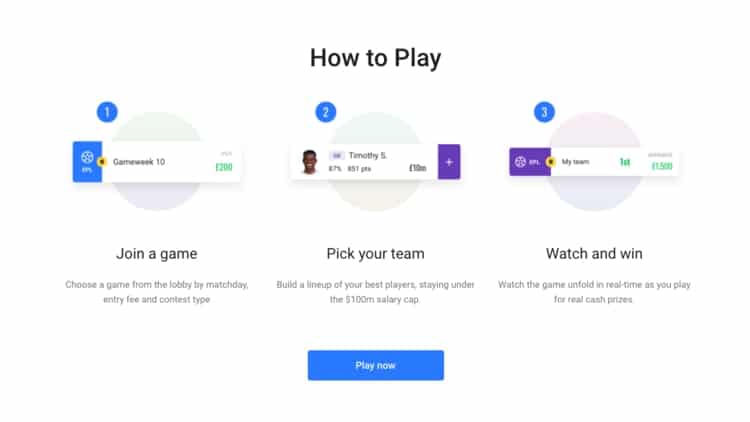 I like PlayON because they have put a real effort to make everything as simple as possible. Their site isn’t too flashy, but the navigation is straightforward, so even complete beginners will find the way around pretty quickly.

If this is your first encounter with fantasy sports, take a look at my quick guide below. This is how it works, regardless of the sport or tournament type you pick.

Note that PlayON takes between 3 and 10% commission, depending on the tournament type and size.

What Sports are Available at PlayON?

PlayON started as a fantasy sports site focused primarily on overseas sports and leagues. But as time went by, they have started adding more and more popular Australian sports. Today they feature a few local leagues, including AFL, Rugby Union and Rugby League. However, their coverage is still far from being the best on the market.

Since they aren’t originally Australian, you’ll find a bunch of foreign sports as well. They have great soccer coverage, as well as an excellent selection of US leagues, like the NFL and NHL. PlayON is an official partner of the NBA, which should make all the basketball fans very happy. On top of that, they’re also a DFS partner of Formula 1.

The only thing lacking here is horse racing. In case you want to try fantasy horse racing, visit Draftstars. They are the only DFS site in Australia to have it on offer. We explain everything in great detail in our comprehensive review of Draftstars.

Draftstars is the only Australian betting site to offer fantasy horse racing! Click the button below to learn more about Draftstars fantasy features! Draftstars review

Here is the full list of sports available at PlayON:

What Types of Tournaments Are Available?

PlayON Australia offers several tournament types. All of the contests are available as both free and real-money tournaments, meaning that you can try all of them without any strings attached. I believe that Double Ups and One-on-One contests are the best for beginners because they are the simplest ones to grasp. However, I encourage you to eventually try all of them. That’s the only way to learn what suits you the best.

These are all game types available at PlayON.

Here I’ll explain how the fantasy scoring at PlayON Australia works. Since there are so many options on offer, I’ll focus only on the most popular sports. In case you want to learn more, note that PlayON has all of the details listed on their site.

Note that you’ll start with 100 million dollars budget on every fantasy draft.

If you’re interested in a specific sport, use the link below to jump straight to it!

AFL is from recently also available on PlayON. Here is how many players you’ll have to draft and how the scoring works.

The scoring table you see below works for all Rugby Union competitions, which includes Super Rugby, Rugby World Cup, Bledisloe Cup and so on. I’ll also list how many players you’ll have to draft.

NRL is one of the most popular leagues in Australia, so it’s no wonder PlayON included it in its offer. The scoring and players selection you see below also works on all other Rugby League competitions.

PlayON offers a fantastic selection of fantasy football leagues, which includes the English Premier League and many other popular options. The scoring below applies to every football league at PlayON.

NBA is one of many US leagues available at PlayON. Take a look at the scoring and player requirements. 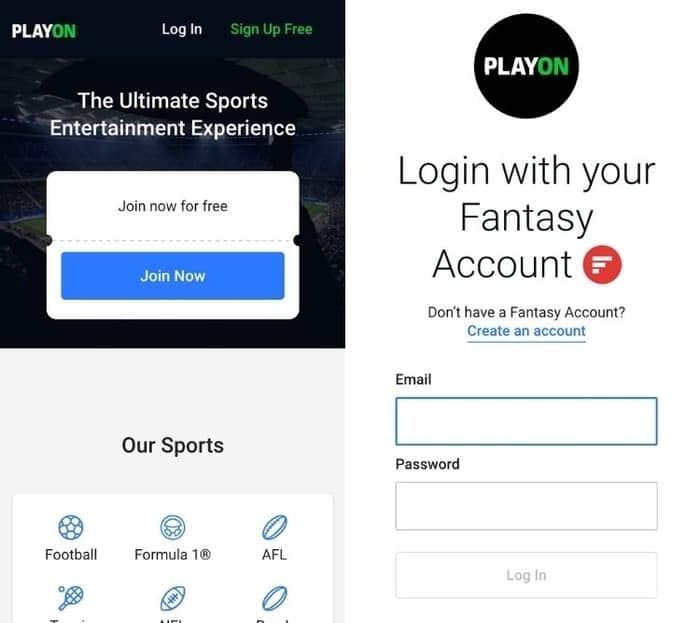 PlayON has a very limited mobile betting offer. At the time of writing this review, they don’t offer any native smartphone apps. However, the web-based app works nice, so I was still able to use PlayON even when on the go.

The PlayON mobile site loads very quickly and offers all the same features as the desktop site. You can use it on all mobile devices regardless of the operating system without having to download anything. All you need to do is visit the PlayON website using a mobile browser, and that’s it! It offers the same range of sports and fantasy contest as the desktop version of the site.

But if having an installable app is especially important to you, then PlayON is a no-go. In that case, I strongly suggest registering with Draftstars. They have excellent native apps for both Android and iOS. I have explained everything you should know about them in my analysis of Draftstars, which is well worth taking a look at.

You can deposit and withdraw at PlayON using either VISA debit, Skrill, or Neteller. As a huge fan of e-wallets, I haven’t had any issues here. However, the problem is that a lot of people still don’t use Skrill and Neteller, or prefer Mastercard for everyday stuff. That could be a serious deal-breaker for many punters, so I hope that PlayON will add more option sometime soon.

You can clearly see that they are a foreign company since there are no Aussie specific payment methods, such as POLi or BPAY. Adding them would make PlayON much more tempting for Australian bettors. Other fantasy sports sites in Australia also have a very weak selection of banking options, so this could be a game-changer for PlayON.

All withdrawals are usually processed within 72 hours, which is not that great compared to their competitors. But don’t forget to verify your account as soon as possible since they won’t let you take out your winnings before the identity check is done.

Customer support isn’t one of PlayON’s stronger sides. They say on the site that you can get in touch with support agents by clicking on the live chat icon in the bottom right corner of the screen. But at the time of testing, the button wasn’t there at all. I checked again later, and it was still gone. I hope that this is just temporary since a live chat is by far the most efficient way to get your problems solved quickly.

Phone support also isn’t available, so the only way to reach out to them is by sending an email. However, in that case, you’ll have to wait for at least several hours to get an answer.

There is an FAQs page as well, but it’s not too extensive, so it probably won’t be of much use most of the time. I sincerely hope that PlayON Australia will improve customer support at some point soon since what they have now is far from perfect. Almost every other decent bookmaker in Australia has better support, meaning that PlayON should do something fast if they want to stay relevant.

PlayON is a huge company with customers from over 100 countries around the globe, so it’s safe to say that they have proven to be reliable. This betting operator holds licenses from some of the most renowned gambling regulatory bodies in the world, including UKGC and Australia’s Northern Territory Racing Commission.

From what I could see, they have all of the latest safety features installed on their site, such as 2048-bit encryption. Because of this, you don’t have any reason to worry about safety when playing DFS with PlayON.

Another great thing is that PlayON Australia offers an array of tools to help you stay in control of your play. It includes features like Deposit Limits, Transaction History and Self Exclusion. The thing I don’t like here is that they only list the contact details for UK-based agencies that deal with problem gambling. I get it, it’s because PlayON is a UK company. But still, I’m sure that Aussie punters would feel much better if PlayON listed some local institutions as well, such as Gambling Help Online. 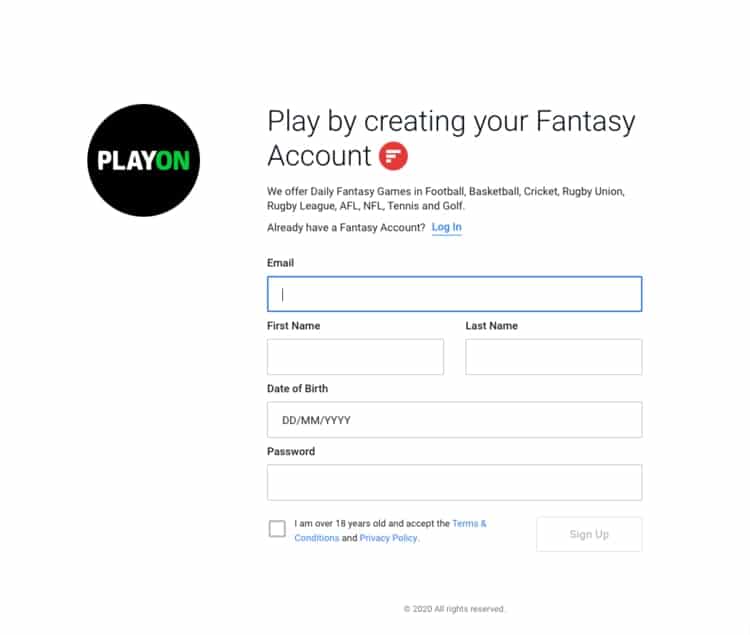 PlayON has an excellent daily fantasy sports offer. You can choose between many popular sports and tournament types. Everything is packed inside of a user-friendly website, so even complete beginners won’t have a hard time finding the way around.

As you could see from my PlayON review, it’s clear that their platform is still rough around the edges. Customer support isn’t great, the range of payment methods could be better, and most importantly, there are no native apps. PlayON is still work in progress, so I suggest you join one of the more established fantasy sites. Trust me, it’ll save you a lot of time and nerves.

PlayON isn't the best option for fantasy sports betting in Australia. It comes with quite a few downsides we just couldn't ignore. Instead, check out our top rated operators. Top PlayON alternatives

How to use PlayON?

PlayON is a daily fantasy sports site, which means that they provide new fantasy contests on a daily basis. You should first pick the sport and type of contest you like. After that, draft players to your team and follow the leaderboard. We have explained how PlayON works in great detail in our review.

At the time of writing this review, the only way you can get in touch with PlayON customer support is via email. To learn more about how to contact PlayON, take a look at the review above.

Is it safe to play DFS at PlayON?

Yes, PlayON is a highly respectable company with thousands of customers all around the world. They hold a license from Australia’s Northern Territory Racing Commission, meaning that you can be sure that this operator is 100% safe. To learn more about PlayON security features, take a look at the full review.

What sports are available at PlayON?

PlayON covers all of the popular Australian sports, like NFL, NRL, cricket and so on. On top of that, you can also choose between a nice selection of foreign leagues, such as NBA, NFL and EPL. Scroll up for the full list of sports available at PlayON.